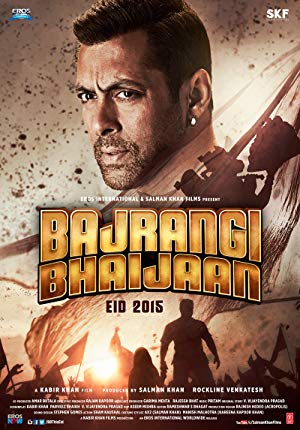 In Sultanpur, a picturesque village in Pakistan, villagers gather to watch a televised cricket match between India and Pakistan. Among them is a pregnant woman Rasia (Meher Vij) who, after giving birth, names her daughter Shahida after Shahid Afridi, the player who wins the game for Pakistan. One afternoon, Shahida (Harshaali Malhotra), now six years old, falls off a cliff as she plays, and is saved by an overhanging tree, but is not able to call for help since she is mute. Since Shahida's father Rauf, a former Pakistani army man, is unlikely to be granted an Indian visa, a concerned Rasia takes her to the shrine of Sufi saint Nizamuddin Auliya in Delhi, hoping it will restore Shahida's speech.
Returning from Delhi, the train stops for repairs just short of the Wagah crossing and Shahida gets off to save a lamb. The train drives off before Shahida can re-board it. Shahida then boards a freight train, and winds up in Kurukshetra, Haryana. There, she meets Pawan Kumar Chaturvedi a.k.a. Bajrangi (Salman Khan), a devout Hindu Brahmin and an ardent devotee of Lord Hanuman. He names her "Munni" and tries in vain to find out where she lives.
In a sequence of flashbacks, it is revealed that Pawan has been a disappointment to his father, after failing in his school exams ten times. When he finally graduates on his eleventh try, his father dies of shock. Pawan, looking for a job, follows the advice of his father and goes to the house of his father's friend and wrestling coach, Dayanand Pandey (Sharat Saxena), in Delhi. Having spent time together with his daughter Rasika (Kareena Kapoor Khan), they fall in love with each other and Dayanand promises Rasika's hand in marriage on the condition that Pawan get a job and a separate house for himself. ReadMore>