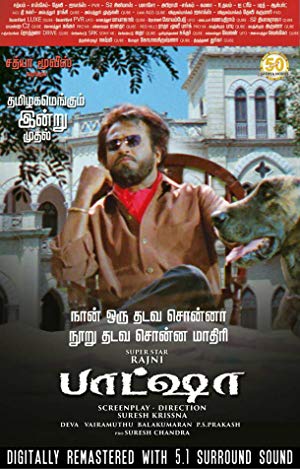 Manikam is an auto driver who lives with his mother Vijayalakshmi, brother Shiva, and sisters Geetha and Kavitha. Manikam is innocent and kindhearted who goes to any extent for the well being of his family members.
Manikam gets his sister married in a good family. Shiva manages to become a sub-inspector of police. On seeing Manikam's photo, DIG Dinakar who interviewed Shiva wants to meet Manikam. Manikam hesitatingly comes to meet Dinakar in his office. Dinakar is reminded of a don on seeing Manikam. Geetha gets admission in a medical college but the college chairman hesitates to give seat because she is poor and asks her to have affair with him in order to secure her seat. Manikam interferes and discloses that his name is "Baasha", hearing which the chairman is scared and gives him a seat.
Meanwhile, Priya, the only daughter of a rich businessman Kesavan travels in Manikam's auto frequently and develops a liking towards him seeing his good character. Priya discovers that her father is a smuggler and decides to maintain a distance with him. Priya proposes her love to Manikam but Manikam does not accept at first as he knows that she is the daughter of Kesavan (with whom Manikam has some issues). But later accepts her love.
Indiran is a local rowdy who uses his henchmen to collect "commission" from all business owners; one day an elderly man was not able to pay commission and one of Indiran's henchmen started to attack him; Shiva gets involved and beats the two men; Indiran finally steps out the van and explains to Shiva that he runs that area and his laws apply. Shiva and Indiran fight only to be stopped by Manikam. Afterward, Manikam interferes and requests Indiran to beat him and not to disturb Shiva. Manikam is tied to a pole and is severely beaten by Indiran and his men. But Manikam bears it for the sake of his brother without any retaliation. Later Shiva once again takes action against Indiran by submitting an arrest warrant which makes him furious again. This time after his release from jail, Indiran kidnaps Geetha and tries to molest her in front of the public. To everyone's surprise, Manikam finally snaps and hits back Indiran and his men badly thereby saving his sister. The beating of Indiran and his henchmen was so severe that it shocked Shiva and he asks about Manikam's past lifestyle in Mumbai when they were young. ReadMore>