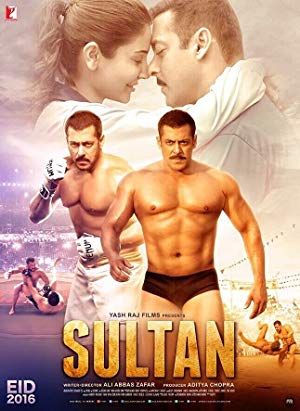 Sultan Ali Khan (Salman Khan) is a middle-aged Jat pehlwani wrestler and ex-wrestling champion, who is living a lonely life in a small town in Haryana. Aakash Oberoi (Amit Sadh), the founder of a private mixed martial arts league backed by Mr. Patel (Ivan Sylvester Rodrigues), is encouraged by his father to recruit Sultan to salvage the league's popularity. After traveling to Haryana he makes an offer to Sultan, who bluntly refuses and says that he has completely retired from wrestling. In search of the reason behind his retirement, Aakash confronts Sultan's close friend Govind, who narrates how Sultan's career began.
During 2008, Sultan falls in love at the sight of Aarfa Hussain (Anushka Sharma), a state-level wrestler and the daughter of a local wrestling coach. Although she is initially cold towards him, she accepts Sultan as a friend. When he begins to claim that they are committed, she insults him saying she would only marry a well-trained wreslter. Determined to win her respect, Sultan dedicates himself to intense training and ultimately wins a state-level wrestling tournament, as well as Aarfa. The two get married and become recognized wrestlers, representing India in various international tournaments. When the two are selected for the Olympic contingent, Aarfa discovers that she's pregnant. She gives up her childhood dream of winning an Olympic gold medal for India, which is then fulfilled by Sultan.
To her surprise, Sultan's accomplishment makes him arrogant, and he slaps a reporter at an event. He also leaves Aarfa nearing her due date to win a gold at Turkey. Upon returning, he finds that his newborn son had died due to severe anaemia. The baby had a rare O- blood type, identical to Sultan's, whose absence deprived the child of a donor. Angered, Aarfa decides to leave Sultan and reside with her father. Depressed from losing his wife and child, Sultan begins raising funds to open a blood bank of his son's name.
In the present day, Aakash promises Sultan that the tournament's prize money will fulfill his dream of opening a blood bank. Sultan agrees to participate, and travels to train in Delhi, where Aakash introduces him to MMA coach Fateh Singh who initially refuses him, but agrees after seeing his determination. After two months of training, Sultan regains his physique and learns how to wrestle freestyle. In his first fight, Sultan defeats the opponent using his own iconic wrestling style. He soon becomes a nationwide sensation once again by winning a series of matches and gains Aarfa's support in the process.
During the semi-final round, Sultan wins the fight but is severely injured and has to be hospitalized. The doctor informs Aakash that Sultan should not fight again lest his injuries become fatal. Aarfa arrives at the ward and motivates him to continue fighting. During the final match, Sultan overcomes his pain to defeat his opponent and ultimately wins the tournament. Reunited with his wife, Sultan opens a blood bank using the prize money and Aarfa resumes wrestling. A few years later, she gives birth to a baby girl, whom Sultan begins to train as a wrestler. ReadMore>