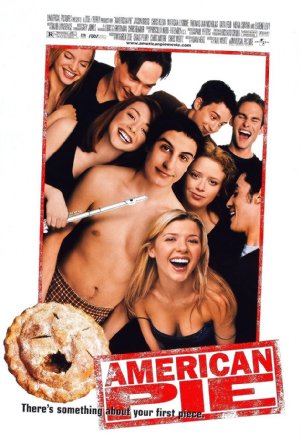 Five high school seniors from East Great Falls High School in West Michigan are good friends: Jim Levenstein, an awkward and sexually naïve nerd whose dad, Noah, offers him pornography and unwanted sexual advice; Chris "Oz" Ostreicher, on the school lacrosse team; Kevin Myers, the calm leader of the group seeking to lose his virginity to his girlfriend Vicky; Paul Finch, a mochaccino-drinking sophisticate and nerd; and Steve Stifler, a popular but a raucous jock who often throws wild parties when his mother is away, and is the only one of the five who has lost his virginity. Dorky classmate Chuck Sherman claims that at a party hosted by Stifler he lost his virginity. Kevin prompts Oz, Finch, Jim, and Kevin to pledge to no longer be virgins by their high school graduation.
Vicky accuses Kevin of wanting her only for sex, and he has to repair their relationship before the senior prom night, now the target day the four plan to lose their virginity. Oz joins the school jazz choir to find a girlfriend, learns about sensitivity, and that it is about asking girls questions and listening to what they say. He soon wins the attention of Heather, a girl in the choir. Heather learns about Oz's reputation, breaks up with him, and then learns to trust him when he leaves the lacrosse championship game to perform a competition duet with her.
Jim pursues Nadia, an exchange student from the former Czechoslovakia. Oz tells Jim that third base feels like "warm apple pie" and when found by Noah having sex with a pie Noah is persuaded to keep it from Jim's mother. Stifler persuades Jim to set up a webcam in his room so that they can all watch Nadia changing clothes (before she goes to ballet class). Nadia discovers Jim's pornography collection and while half-naked sitting on his bed masturbates to it. Jim is persuaded to return to his room, where he joins Nadia, unaware that he has sent the webcam link to everyone on the school list. With her, he experiences premature ejaculation twice. Nadia's sponsors see the video and send her back home, leaving Jim dateless for the prom.
Jim thinks band camp geek Michelle Flaherty is unaware of the cam incident so he asks her to the prom. Finch pays Vicky's friend, Jessica, $200 to spread the rumor of his sexual prowess, hoping that it will increase his chances of success. Stifler is turned down by a girl because she wants Finch to ask her; he spikes Finch's mochaccino with a laxative. Stifler plays to Finch's school restroom germaphobia to use the girls' restroom. Finch has diarrhea, and is humiliated by the crowd of students.
Vicky asks Sherman's conquest about his claim. Everyone learns it is false and as a result, Sherman wets himself, in front of everyone at the prom.
The boys plan to fulfill their pledge at the Stifler post-prom party. Kevin and Vicky have sex in an upstairs bedroom. Vicky breaks up with Kevin afterwards on the grounds that they will drift apart when they go to college. Oz confesses the pact to Heather, and renounces it, saying that just them being together makes him a winner. They reconcile and have sex. Oz, honoring his newfound sensitivity, never divulges what they did.
Michelle accepted Jim's offer to be his date because she saw the "Nadia Incident" and thought he was a "sure thing". Michelle is sexually aggressive in bed. When he wakes up, she is gone and he learns that he had a one-night stand with her but he is okay about it.
Finch meets Stifler's mother in the basement recreation room where they have sex on the pool table. Stifler finds them on the pool table asleep and he faints. The morning after the prom, the boys eat breakfast at their favorite restaurant where they toast to the "next step".
From Slovakia, Nadia watches Jim's webcam; in the webcam, he is stripping. Jim is oblivious to his father walking in. Noah walks out of the room and starts dancing. ReadMore>