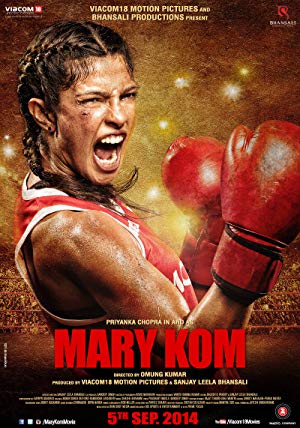 The film opens with Mangte Chungeijang Kom (Priyanka Chopra) in labour, walking towards the hospital in the rain with her husband, Onler Kom (Darshan Kumaar) during a riot or insurgency in Imphal, Manipur in 2007. Due to a curfew, they have difficulty finding public transport and Onler is mistaken for an insurgent and beaten when he tries to find a vehicle. The film then shifts to a flashback in which Kom found boxing gloves in the remains of an air crash in 1991 in Kangathei, which prompted her interest in boxing despite her father's disapproval. During an early fight, she chases a boy and ends up in a boxing gym. After realising that the coach of the gym, Narjit Singh (Sunil Thapa), was also the coach of the Asian champion Dingko Singh, Kom tells him about her boxing aspirations. He asks her to visit the gym for the next thirty days and says that he will only teach her if she is deserving enough. She starts visiting the gym, informing her mother but not her father. Days pass but her coach does not enquire about her. Due to Kom's dedication and stubbornness, Singh starts training her. Later, he suggests changing her name to Mary Kom.
Kom challenges a local wrestler for money, in order get a household cow back, which the family had to sell off because of their financial troubles. This is where she meets the footballer Onler Kom. After winning the state-level championship, her father confronts her for keeping her involvement in the sport from him. When her father asks her to choose between him and boxing, she reluctantly chooses the sport. After watching her victorious 2002 Women's World Amateur Boxing Championships match on television, her father reconciles with Kom, and apologises to her for not understanding her passion for the sport. Meanwhile, Onler proposes to her and agrees never to ask her to quit boxing. After she wins the 2006 Women's World Amateur Boxing Championships, Kom agrees to marry him much to her coach's dissatisfaction. After the marriage, Kom gets pregnant and gives up her career to look after her family.
Kom gives birth to twins and applies for a government job. However, she refuses the position of a police constable, feeling that as a world-champion boxer, she deserves better. It devastates her to learn that people no longer recognise her. Onler encourages her to restart her boxing training. She joins the gym again, leaving her husband to look after the twins at home. Her coach is still upset about her decision to marry, but Kom makes a comeback in the National Boxing Championship. Despite performing better than her opponent, she loses the match due to the apparent partiality of the judges. Kom throws a chair in anger towards them, resulting in a ban. She later writes an apology letter, and the official accepts it, but only after insulting her.
Kom then convinces Narjit Singh to train her, as she thinks that he is the one who can get the best out of her. After completing her training, she participates in the 2008 AIBA Women's World Boxing Championships and reaches the finals. Meanwhile, Onler informs her about one of her children having ventricular septal defect. In the subsequent fight, Kom fails to defend herself. After a knockout punch from her opponent, Kom hallucinates about her husband and children in the audience. She regains her strength and fights back, winning the championship. On the podium while accepting the medal, she learns that her son's surgery was successful. Later, she is given the nickname "Magnificent Mary". The film ends with the Indian flag waving and the Indian national anthem playing in the background. ReadMore