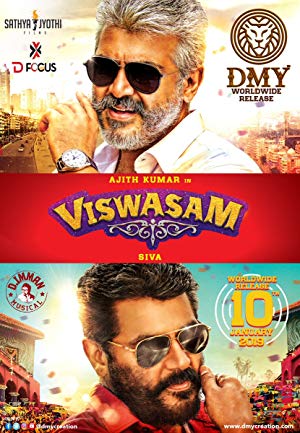 Thookku Durai (Ajith Kumar) is the well-respected chieftain of his village Koduvilaarpatti of Theni district. After 10 years, a thiruvizha (festival) is set to occur at the village's Ayyanar temple, when Thooku Durai's rival, Kozhimuthu (O. A. K. Sundar) tries to stop it from occurring. The thiruvizha occurs, thanks to Thooku Durai's intervention; however, his aunts (Kalairani and Sujatha Sivakumar) and grandmother (Cheeniamma) have been longing to see his wife and child. After much deliberation, Thooku Durai decides to go to Mumbai to meet them.
On the journey, Merit (Robo Shankar) and Rosamani (Thambi Ramaiah) are upset over Thooku Durai's current life and remind him of his life 10-12 years ago; Thooku Durai used to be a happy-go-lucky man and rice mill owner, and was also a Good Samaritan, albeit using violent ways to deal with problems. When chasing a few goons, he stumbles across Niranjana (Nayanthara), a doctor, who witnesses his antics and lodges a case against him. When Thooku Durai sees Nirajana, he is immediately smitten by her and surrenders to the police, out of the love he has for her, but she is later forced to release him after Aavudaiyappan (Mime Gopi) threatens to close her medical camp unless she pays him. After fighting the goons, Thooku Durai relocates her camp to his rice mill. Niranjana realizes her love for Thooku Durai and proposes to him, which he gladly accepts. They get married and lead a happy life, but Niranjana is disturbed by Thooku Durai's involvement into feuds. Soon, she gets pregnant and is accepted to go to one of the finest pharmaceutical programs in the country, which she refuses for Thooku Durai. After their child, Swetha, is born, one day, Niranjana leaves out of town, after getting a promise from Thooku Durai not to bring Swetha to any fights, and on the way to pick her up, Aavudaiyappan, waiting for revenge, picks up a fight with Thooku Durai. Thooku Durai, not finding Niranjana at the train station, finds her at home, and Swetha passes out as she had been injured during the fight. After rushing to the emergency ward, she survives, but Niranjana gets infuriated at Thooku Durai and tells him to stay away from her and Swetha and leaves him.
Back to the present day, Thooku Durai tries to meet up with Niranjana at her company, Niranjana Pharmaceuticals, to no avail. He later sees his daughter Swetha (Anikha), who is in contention for the Junior National 100m title. Swetha travels home, when attempts are made to kill her. Thooku Durai arrives at the nick of time to save her. It is then revealed that Gautham Veer (Jagapathi Babu) is the one behind this as his daughter had been paralysed while attempting suicide. Gautham Veer is the CEO of Skyline exports and owns a range of multinational companies, and expects the first position in everything, as he used to achieve the same in his earlier days, including academics and sports. He expects the same of his daughter, who is slower than Swetha by milliseconds. After Gautham threatens his daughter that she would find no affection in him if she loses, she resorts to doping which helps her win the race. Unfortunately this is found out by Swetha, who reports it to the authorities. Fearing that her father's reputation and affection would completely vanish, his daughter attempts suicide but becomes paralysed in the process. Gautham Veer is distraught on seeing his daughter's condition and vows to have Swetha killed at any cost. ReadMore>