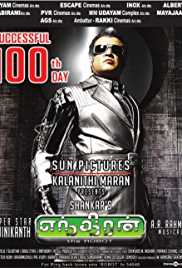 After a decade of research, the scientist Vaseegaran creates a sophisticated android robot with the help of his assistants, Siva and Ravi, to commission it into the Indian Army. He introduces the robot, named Chitti, at a robotics conference in Chennai. Chitti helps Sana, Vaseegaran's medical student girlfriend, cheat in her examination, then saves her from being assaulted by a group of thugs. Vaseegaran's mentor, Professor Bohra, is secretly engaged in a project to create similar android robots for a terrorist organisation, but has so far been unsuccessful.
Vaseegaran prepares Chitti for an evaluation by the Artificial Intelligence Research and Development (AIRD) Institute, which is headed by Bohra. During the evaluation, Chitti attempts to stab Vaseegaran at Bohra's command, which convinces the evaluation committee that the robot is a liability and cannot be used for military purposes. Vaseegaran's effort to prove Bohra wrong fails when he deploys Chitti to rescue people from a burning building. The robot saves most of them, including a girl named Selvi who was bathing at the time, but she is ashamed at being seen naked on camera and flees, only to be hit and killed by a truck. Vaseegaran asks for one month to modify Chitti's neural schema to enable it to understand human behaviour and emotions, to which Bohra agrees. While nearing the deadline, Chitti becomes angry with Vaseegaran, demonstrating to him that it can manifest emotions.
Chitti uses Sana's textbooks to successfully help Sana's sister Latha give birth to a child. Bohra congratulates Vaseegaran on the achievement and allows Chitti to pass the AIRD evaluation. Chitti develops romantic feelings for Sana after she congratulates Chitti by kissing it. When Vaseegaran and Sana realise this, Sana explains to Chitti that they are only friends. Saddened by Sana's rejection, yet still in love with her, Chitti deliberately fails an evaluation conducted by the Indian Army. Enraged, Vaseegaran chops Chitti into pieces, which are dumped by Siva and Ravi into a landfill site.
Bohra visits the site to retrieve Chitti, which has now reassembled itself, albeit in a damaged state. Bohra embeds a red chip inside Chitti while reconstructing it, converting it into version 2.0, which is more aggressive and unempathetic. It then gatecrashes Vaseegaran and Sana's wedding, kidnaps Sana, creates replicas of itself, and then kills Bohra. Using its robot army, Chitti occupies AIRD and causes mayhem in the city. After informing Sana that it has acquired the human ability to reproduce, Chitti wishes to marry her so that a machine and a human being can give birth to a preprogrammed child, but Sana refuses. It eventually finds Vaseegaran, who entered AIRD to stop it, and nearly kills him before the police appear. The ensuing battle between Chitti's robot army and the police personnel leads to a lot of property destruction and many casualties. Vaseegaran eventually captures Chitti using a magnetic wall and accesses its internal control panel, whereby he instructs all the other robots to self-destruct. He then removes Chitti's red chip, calming it.
In a court hearing, Vaseegaran is sentenced to death for the casualties and damages caused by the robot army, but Chitti explains that it was Bohra who caused its deviant behaviour and shows the court video footage of Bohra installing the red chip. The court releases Vaseegaran, while ordering that Chitti be dismantled. Left with no choice, Vaseegaran asks Chitti to dismantle itself. While saying goodbye, Chitti apologises to Vaseegaran and Sana, who forgive it, before dismantling itself.
The film's setting then shifts to 2030. Chitti is now a museum exhibit. A curious school student on excursion asks her guide why it was dismantled, to which Chitti responds, "Naan sinthikka arambichen" (I started thinking). ReadMore>