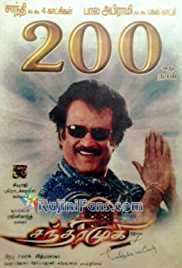 Saravanan, a psychiatrist, meets up with his foster brother Senthilnathan alias Senthil, and his wife Ganga while on vacation. Senthil's mother Kasthuri wanted Senthil to marry Priya, the daughter of his father's cousin Kandaswamy, to reunite the two branches of the family after 30 years of separation because Senthil's father chose to marry Kasthuri instead of Kandaswamy's sister, Akhilandeshwari. Saravanan learns that Senthil had bought the Vettaiyapuram mansion, despite attempts by the local village elders to dissuade them, and moves in with them. Akhilandeshwari is jealous of Saravanan and plots to kill him with the help of her assistant Oomaiyan.
When the family visits their ancestral temple, the chief priest reveals the reason everyone fears the mansion. 150 years ago, a king named Vettaiyan travelled to Vizianagaram in Andhra Pradesh, where he met and fell in love with a dancer named Chandramukhi. However, she did not reciprocate his feelings as she was already in love with a dancer named Gunashekaran. As a result, Vettaiyan took her back to his palace by force. Unknown to him, Chandramukhi made Gunashekaran stay in a house nearby and had meetings with him secretly. When Vettaiyan discovered this, he beheaded Gunashekaran on Durgashtami and burnt Chandramukhi alive. As a result, Chandramukhi's ghost tried to take revenge on Vettaiyan, who with the help of various priests and sorcerers from all over the country, tames the ghost by locking it up in a room located in the palace's south-west corner. Priya is in love with Vishwanathan, a dance professor who reciprocates her feelings. Their love is supported by Saravanan, who requests Kandaswamy to arrange their marriage.
After hearing Chandramukhi's story, Ganga, who thinks that the story was fabricated to scare thieves from stealing treasures in the room, wishes to go there. She gets the room key from the gardener's granddaughter Durga and opens the door to the room. Saravanan sees a conversation between Durga and Ganga, and runs away, thinking that Durga is possessed, because a flash of light appeared when both of them were speaking. Subsequently, strange things begin to happen in the household; a ghost frightens the people in the house, things inexplicably break, and Ganga's sari catches fire. Suspicion turns towards Durga. Senthil immediately calls Saravanan to solve the case. As soon as Saravanan returns, a mysterious being tries to kill Priya. Saravanan also investigates other incidents such as the attempts to kill Senthil are made with poisoning his coffee and by pushing a fish tank on top of him, and a mysterious voice singing during the night.
Ganga mysteriously disappears during Priya and Viswanathan's wedding reception. Saravanan notices her absence and searches for her, but he is almost killed by Oomaiyan—who has been sent by Akhilandeshwari. Saravanan subdues Oomaiyan and with Senthil's help finds Ganga, who is supposedly being sexually harassed by Viswanathan. Saravanan reveals to Senthil and Viswanathan that Ganga suffers from split personality disorder. Saravanan tells them that Ganga tried to kill Priya and Senthil, and framed Viswanathan for sexual harassment because from Chandramukhi's view, Viswanathan is her lover Gunashekaran since he stays at the same place Gunashekaran did. By framing Vishwanathan, Chandramukhi wanted to stop the reception. The only way to stop Chandramukhi is to make her believe she killed Vettaiyan on Durgashtami since Saravanan impersonated Vettaiyan and disrupted one of the pujas conducted by the exorcist Ramachandra Acharya by conversing with the ghost to know its wish. But before that he asks Senthil to trigger Ganga to see by himself whether she is turning into Chandramukhi or not. When Senthil triggers Ganga she shows the dark personality of Chandramukhi which shocks Senthil. Senthil shouts Ganga to make her normal, seeing she had done something weird she cried out loud and pleaded him not to punish him which literally worries him.
Akhilandeshwari overhears Saravanan's idea of self-sacrifice and apologises to him. On Durgashtami, in the dance hall, the family and Ramachandra Acharya allow Chandramukhi to burn Saravanan alive. Ramachandra Acharya blows smoke and ash on Ganga's face when she is given a torch to burn Saravanan. Senthil then opens a trapdoor to let Saravanan escape, and an effigy of Vettaiyan gets burnt instead. Convinced that Vettaiyan is dead, Chandramukhi leaves Ganga's body, curing her. The two families are reunited after 30 years, Saravanan and Durga fall in love, and the couple Swarna and Murugesan become parents after eight years of marriage. ReadMore>