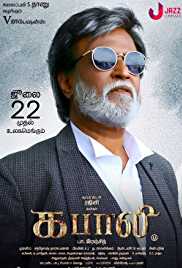 A Kuala Lumpur–based don Kabaleeswaran alias Kabali is released after spending 25 years in prison on a false charge of starting a massacre at a local Hindu temple that killed many, including his wife Kumudhavalli. He immediately resumes charge of his old gang and soon confronts Loganathan, a drug smuggler. Loga insults Kumudha, saying that she would have been sold into prostitution had she been alive. In retaliation, Kabali rams his car into Loga, killing him; however, the incident makes him believe that his wife may be still alive. Later, Kabali survives an assassination attempt by Tamizh Kumaran alias Kumaran, whose father Tamilmaaran was killed by Kabali when Kumaran was a young boy. The next day, at a function organised by the Free Life Foundation School, a school started by Kabali's friend Ameer to reform youngsters involved in criminal activities, Kabali talks about his past.
Kabali was the protege of Tamilmaaran's father Tamilnesan, a don who fought for the rights of Tamil Malaysians. Tamilnesan was killed by Veerasekaran, a member of his gang who disliked his rules such as not involving in illegal activities like drug smuggling and prostitution. Following Tamilnesan's death, Kabali took charge of Tamilnesan's gang. Veera manipulated Tamilmaaran by telling him that he, being Tamilnesan's son, should lead the gang and not Kabali. Tamilmaaran invited Kabali and a pregnant Kumudha for a temple function. However, this was revealed to be a trap as Veera and his men confronted Kabali and Kumudha at the function. In the ensuing scuffle, Kabali was brutally attacked while Kumudha was shot and seemingly killed. Kabali then killed Tamilmaaran for his betrayal in front of a young Kumaran and was soon arrested on a false charge of instigating the massacre.
Kumaran, after hearing Kabali's speech, realises his mistake and apologises to him. He tells him that Velu, one of Veera's henchmen who was present at the temple massacre, is aware of what happened to Kumudha. Kabali then leaves for Thailand, where Velu is residing. On confronting Velu, he learns that his daughter is still alive. At this juncture, Kabali is confronted by Yogi, a contract killer hired by Veera and his boss Tony Lee, who heads the rival Gang 43 in Kuala Lumpur, to eliminate Kabali. Yogi instead kills the men who had come with her and reveals herself to Kabali as his daughter, who had been raised by Velu. She also tells him that Kumudha is still alive and is living with a French family in Puducherry. Kabali and Yogi then leave for Puducherry, where, after several days of searching, they reunite with Kumudha and spend a few days with her there. While in Puducherry, Kabali and his family are attacked by men sent by Tony. However, Kabali and Yogi fight them off and escape safely with Kumudha ReadMore>