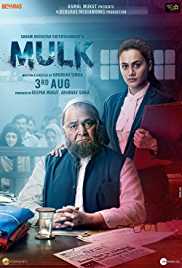 Based on a real-life story, Mulk revolves around the struggles of a Muslim joint family from a Hindu majority town in India, who fight to reclaim their honor after a member of their family takes to terrorism.[10]
Murad Ali Mohammed (Rishi Kapoor), a lawyer by profession lives amiably with his family in a densely-populated diverse locality of Varanasi. His daily routine includes Namaz at a nearby mosque followed by some chit-chat over a cup of tea from a tea stall managed and owned by one of his close Hindu neighbors. His close-knit family consists of his wife Tabassum (Neena Gupta), brother Bilaal (Manoj Pahwa) who owns a mobile phone shop, brother's wife Chhoti-Tabassum (Prachee Shah Pandya), nephew Shahid (Prateik Babbar) and niece Aayat (Vartika Singh). Murad's son Aftab (Indraneil Sengupta) stays abroad with his Hindu lawyer wife Aarti (Taapsee Pannu) and is a little estranged from the family.
The story begins on the day of Murad and Tabassum's wedding anniversary when Aarti comes to visit them. The family enjoys a lovely night with the neighbors and friends. Another story is shown in parallel, where it is revealed that Shahid has joined hands with a terrorist organization headed by the wanted Mehfooz Alam (Sumit Kaul) who assigns Shahid with the task of a bomb blast. After the night of the anniversary celebrations, Shahid leaves early morning for Allahabad and executes the attack as planned with two other acquaintances. A lot of innocent people get killed and SSP Danish Javed (Rajat Kapoor) is assigned with the task to investigate the crime. He tracks down everyone involved with the attack, corners Shahid and finally shoots him dead as he tries to escape instead of surrendering.
Soon, police arrives at Murad's house and starts interrogating the family members. They turn the place upside down to gather evidence. As the news spreads across, people starts to flock outside Murad's house. Police takes Bilaal into custody for further interrogation. Aarti steps up as the defense lawyer for Bilaal and escorts him to police station. Danish tortures and interrogates Bilaal overnight but couldn't extract any information out of him.
Within a matter of hours, the situation around Murad's neighborhood changes drastically. Everyone whom Murad had known for decades starts looking at him as a terrorist. His life's reputation and goodwill gets shattered in a day. Bilaal is taken to court for hearing and the judge Harish Madhok (Kumud Mishra) denies his bail and grants police custody of him for 7 days for further interrogation. After postmortem, police brings Shahid's body to hand it over to Murad, but he refuses to accept. Despite him strongly condemning Shahid's act, situation worsens around Murad's neighborhood where the Hindus tag his entire family as terrorists trying to shame them in every possible way. Stones get pelted inside the house and "Go back to Pakistan" gets written on their boundary wall. On the other hand, some of the Muslims with extremist mindset approach Murad and try to convince him that Shahid has sacrificed his life in the name of Jihad. He is a true martyr and all the Muslims should appreciate his act and rise up against Hindu dominant society which Murad strongly opposes. Despite everything, the family maintains their compose and relies on legal procedures to get their names cleared. ReadMore>