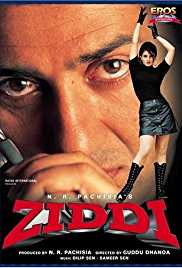 Deva (Sunny Deol), an angry young man, lives with his father advocate lawyer Ashok Pradhan (Anupam Kher), brother Akash (Sachin Khedekar), sister Guddi (Richa Ahuja) and mother (Beena Banerjee). He is greatly vigilant about the well-being of his family – an intrinsic reason of his fury and stubbornness. One day a man named Vilas tries to molest Guddi and forcefully grabs her hand. Deva, in a fit of extreme rage, rips off the hand of the man. Deva is arrested, and is sent to jail for 4 years.
After his liberation from jail, Deva with his henchmen form a tribunal of justice called "Deva Ki Adaalat", where he punishes the evil-doers, mostly the tyrants over the poor. Soon, Deva's name is filed as one of the top four criminals of the city, the other three being Jindaal (Raj Babbar), Laal Singh (Shahbaz Khan) and Khan (Sharat Saxena). These three men are in an effort to do away with Deva, who acts as an impediment to their illegal activities. Asst. Commissioner of Police Inder Saxena (Ashish Vidyarthi) has a genial relationship with Deva and his family but is secretly planning to apprehend and punish him under legal task, in case adequate evidence is gathered by police against Deva. Concurrently, a club dancer Jaya (Raveena Tandon) falls for Deva.  ReadMore>