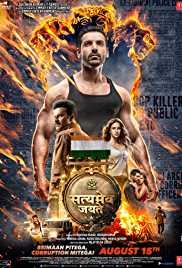 The movie starts with the gruesome killing of a police officer by a hooded man. The policeman is burnt alive and his ashes are left on the stairs of the police station in a pot. The hooded man challenges all corrupt policemen, stating that he will kill them all brutally if they don't stop taking bribes. The killer is shown to be Virendra Rathod (John Abraham). Later, a beggar's wife is killed, and the policeman assigned to the case takes a bribe from the culprit. Upon reaching home, the policeman is killed and burnt by the hooded man.
While cleaning on the beach, a man brags about how he took responsibility for cleaning his country so that the Indian flag could be hoisted high, but a girl named Shikha (Aisha Sharma) makes fun of him for not hoisting the flag properly. After this remark, the minister replies that the man only made a small mistake. Shikha says that the people who stand in movie theatres, those who sing the National Anthem with respect, and the soldiers who sacrifice their lives to keep the flag hoisted all don't believe it's a small mistake. Virendra, impressed, moves onto the next area and cuts his finger. Shikha sees him and introduces herself.
The senior inspector for the murders of the two policemen sends for Shivansh (Manoj Bajpayee), one of the most efficient officers, who was previously on leave. Shivansh begins to search for the murderer. He gets a call from Virendra himself (who is disguised with a deep voice), who threatens that the corrupted officer to die will be in Thane, which Shivansh misinterprets as the "Police Thana" (police station). A corrupt officer is killed by Virendra soon after when his bike's gas tank is punctured and he is set on fire. Shivansh is shocked and while brainstorming realizes that the killer is carrying out killings according to the acronym "Satyameva Jayate".[clarification needed]
The police now expect the fourth killing to be at a place beginning with the letter Y. While a police officer brutally beats a suspect, Virendra enters in a police uniform and ties a blindfold on the suspect's eyes, burns the inspector, and flees. Shivansh (who was on a stakeout) just barely misses Virendra at the station. Later, Virendra and Shikha meet at the happy animals center where she works, and they get together. One night, when Shivansh returns home, he sees an open window. He enters suspiciously, and upon finding someone in his house, he aims a gun at their forehead. The intruder turns out to be Virendra, but the two laugh it off, as Virendra is revealed to be Shivansh's younger brother. A flashback is shown, where on independence day the two brothers are taught by their father about the oath taken by police officers. Both of them aim to be police officers when they grow up. But their father, Inspector Shiv Rathod (Chetan Pandit) is then suspected to be involved in drug trading and is arrested and detained. He commits suicide by burning himself in front of the flag on the very same day. In the present, the brothers unite, and the next day Shivansh says he'll drop Virendra off to work. The two stop by a hospital on the way. As Virendra goes up to hand his brother his phone, he notices that the police officer at the jail is still alive. While coming back, he notes the officer's room. After excusing himself to go to the bathroom, Virendra jumps through the window and breaks in the police officer's room. He burns the officer and the hospital sirens go off. He then lies to Shivansh, asserting that the killer pushed past him and escaped. Later, Shivansh asks all the corrupt policemen to gather at one place, hiring security to assure their safety. Virendra takes out Shikha for a date, which gives him an alibi for the day. Shivansh then gets a call from Virendra, whose voice is disguised. Virendra states that he will continue the killings and that Shivansh will clap for him when they meet in person. Soon after, Shivansh claps for Vir at his art exhibition, where Vir speaks about his father. This hurts Shivansh, who believed that his father was corrupt. Later, Vir and Shikha are shown together, and Vir warns her to stay away from him, but Shikha says she has dealt with the pain of losing family members, as she lost her mother and hasn't contacted her father for 15 years ReadMore>