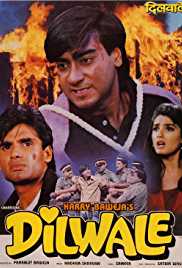 The film opens at a mental asylum, where doctors discuss the strange case of Arun Saxena (Ajay Devgn). His behaviour is very different from all the other mental patients. Arun tries to escape from the hospital but is stopped just in the nick of time by the doctors. Arun's mother (Reema Lagoo) sits in front of a temple every day with her back turned to God, only vowing to face God when hope comes. Enter Inspector Vikram Singh (Suniel Shetty), a tough no-nonsense hot-headed young honest cop who has been assigned the case of Arun. At first, Vikram refuses thinking he will go mental, but during a visit to Arun, he is touched by seeing his behaviour towards his former flame Sapna, because of whom he became mental.
Vikram demands answers as to how a person like Arun could commit a murder. so he visits Arun's mum where the story goes into a flashback: Arun was a happy free-spirited young man who was always jovial in his life. Whilst attending his college's friend birthday party, Arun is love struck when he sees Sapna (Raveena Tandon) and immediately falls in love with her, despite her not knowing this. Sapna's evil uncle Mama Thakur (Paresh Rawal) has been holding a facade for the last 20 years as his hidden motive is to usurp Sapna's wealth. Arun makes it clear to everyone in the college how much he loves Sapna and will go to any lengths for her when he bashes up Shankar Bihari (Gulshan Grover) a goon hired by Mama Thakur to marry Sapna so that he can get her wealth. Sapna at first thinks Arun is a flirt, but later confesses her love for Arun after seeing Arun almost commit suicide for her. ReadMore>