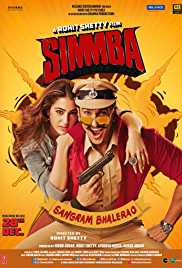 Sangram "Simmba" Bhalerao is an antiheroic orphan from Shivgadh, the same town where Bajirao Singham was raised. He observes how policemen make money in the form of bribes, finding himself motivated to become a police officer, and succeeds. Getting bribes from some local thieves and a jeweler, Simmba enjoys and takes full advantage of the lifestyle of a corrupt cop.
He is soon transferred to Miramar police station, where he sees Shagun Sathe and falls in love with her at first sight. He meets his fellow policemen and one of his juniors, Nityanand Mohile, who is an honest constable, hesitates to salute Simmba as he's a corrupt cop. In order to prove his worth in Miramar, he interrupts a pub party run by Durva Yashwant Ranade's brothers, Sadashiv "Sada" Ranade and Gaurav "Giri" Ranade and demands more money from them, whilst promising that he will let them continue with their illegal activities. Durva agrees and uses Simmba to free a land from an old person Vaaman Rao, who is forced to sign the papers by Simmba. Meanwhile, Simmba develops motherly and sisterly bonds with several women and girls, one of whom happens to be Aakruti Dave, a young woman who reminds Simmba of his teacher.
Aakruti files a complaint against Sadashiv and Gaurav for dealing illicit drugs in their pub and using children as peddlers. Simmba initially ignores this after being pacified by Durva, and Shagun in the meantime falls in love with him. Meanwhile, Aakruti learns about the drug racket in the club and goes there one night with Chotu, a mute boy who's her student. She videotapes by cell phone to show evidence to the police, but is caught by Sada and Giri. Chotu discreetly records Sada and Giri assaulting Aakruti and flees once both of them realize.
Aakruti is brutally raped by Sada and Giri. Chotu tries to tell Akruti's friend Kavya about Akruti being in danger. Kavya whilst being chased by Durva's goons goes to Simmba to file Aakruti's missing complaint. Aakruti is found injured in hospital. Simmba tries to talk to her but she dies, leaving him devastated. Police recover the phone and the video and Durva sends his goons to get the phone from Simmba, who is present, mends his ways, and fights them all. Simmba finally wears his police uniform and seeing this change in him, Mohile finally salutes him as they arrest Sada and Giri. He apologizes to Vaaman Rao, and returns the land swindled from him. In the court, Simmba is shocked to find Aakruti's video being deleted. He beats up Durva's friend who gave a false statement in the court, leading to his suspension orders. He decides to kill Sada and Giri before he goes, and plans to show it as an encounter. He shoots them both and shows as if he killed them in a act of self-defence. A SIT committee is set up by the state, who question Simmba's encounter. In order to achieve clarity to the situation, Home Minister Vinayak Dutta appoints a neutral officer to handle Aakruti's case, as well as Simmba's controversial encounter.
Enraged, Durva and his goons capture Simmba. Suddenly DCP Bajirao Singham comes to his rescue and both of them beat up Durva and his men. Singham tells Simmba that he is the officer, appointed by the committee to handle his case and gives a statement that Simmba killed Sadashiv and Gaurav in an act of self-defence. He also calls Dhurva's mother and wife, who each give a statement that it was Sadashiv and Gaurav who raped Aakruti and that the brothers ran a drug racket and several other criminal activities. Singham reveals that he helped Simmba despite being against his corrupt actions, so that he could instill a fear of law in the minds of men who do not respect women.
As Singham leaves Miramar Police Station, he is talking to DCP Veer Sooryavanshi[11] (Akshay Kumar). Singham congratulates him on his new post as ATS chief, and Sooryavanshi tells him that he will meet him soon. ReadMore>