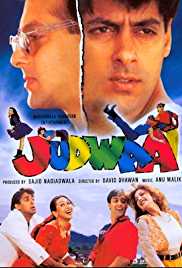 Jayantilal "Ratan" (Deepak Shirke) is a dacoit. Inspector SP Malhotra (Dalip Tahil) arrests him. Ratan wounds himself and is taken to the hospital, where Malhotra is waiting for his wife Geeta (Reema Lagoo), who is in labour. She gives birth to twins and the doctor explains that both babies have a reflection mentality, which means that "what happens with one baby might be felt and reflected by another" depending on the proximity between them. Ratan escapes and takes one of the twins with him, injuring Geeta. Malhotra goes behind him, but unable to find his son, shoots escaping Ratan to stop him. The kid grows up as Raja (Salman Khan) and finds a girl child, who he adopts as his sister. He finds another orphan, Rangeela (Shakti Kapoor) and becomes his friend. They both together take care of the girl and become thieves. On the other hand, Geeta goes into depression and gets paralysed. Malhotra takes her to the US for her treatment, where the other twin Prem (also Salman Khan) is brought up. He comes to India as a rock star for a show. He is received by Kader Khan (Malhotra's friend) who wishes to marry his daughter Mala (Karisma Kapoor) to him. But Mala is in love with Raja. At the airport, Prem finds Rupa (Rambha), daughter of Sundari Batwani (Bindu), the organizer of his public shows. Prem falls in love with Roopa. Tony (Jack Gaud), Sundari's nephew also wishes to marry Roopa. Meanwhile, Mala misunderstands Prem for Raja and starts flirting with him. One day, in a restaurant, both Twins see each other and find out that they are identical, which leads to hilarious misunderstandings. ReadMore>