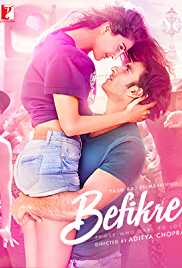 In Paris, Befikre starts with a nasty fight between Dharam (Ranveer Singh) and Shyra (Vaani Kapoor), which leads to a sudden break-up. Shyra leaves Dharam, and goes to her parents’ house, asking them to let her in as long as they don't ask any questions about Dharam or their break-up. Dharam hails from Karol Bagh, New Delhi, and is a stand-up comedian working in his friend, Mehra’s (Aru Krishansh Verma) doomed restaurant. The night of his break-up, he mocks people in relationships and praises being single.
The film then flashes back to the time when Dharam first came to Paris in search of work and adventure. To his surprise, he shares his room with a girl who is a lesbian. Mehra takes him to a party where he meets and hooks up with the fun-loving Shyra, a tourist guide, whose parents are Indian, but who was born and raised in France. He later asks Shyra out on a date. She promises to go out on a date with him if he accepts her dare to slap a police officer. He does so, and they start dating. During their relationship, they keep giving crazy dares to each other. Eventually, the couple decides to enter a live-in relationship and Dharam meets Shyra’s parents, who are chefs in their own Indian restaurant. After many misunderstandings and fights (including the one shown at the beginning of the film), Shyra moves out and moves back in with her family
In the present, Dharam is still mocking his broken relationship at the same restaurant. During the months that follow, Dharam and Shyra keep meeting accidentally, showing that they still haven’t gotten over each other and miss each other's company. They finally decide to become friends again and celebrate their breakup anniversary on the Pont des Arts Bridge. They swear never to fall in love with each other again and tie a breakup lock. ReadMore>