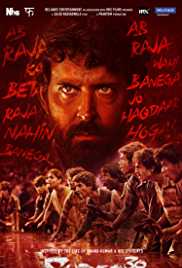 Anand Kumar is a lower-class student who has a passion in studies and is good at it. The local minister, proud of him, promises for help whenever needed. Anand Kumar also has a friend, Ritu Rashmi,with whom he spends time. Anand, every weekend, goes to another city's library to solve a foreign Math journal. One day, the manager finally catches him, and says that he has no right to read there. One staff member suggests him to get featured in an article on the newspaper, so that he becomes famous and will get free subscription of the journal. Anand goes to the post-office, where his father works as the head. He then gets featured in the newspaper for solving some tough Math problems. He gets a letter from Professor Richard of Cambridge University to come there. But, Anand needs money to travel. He and his father go the local minister but he denies any promise. They both further try to have money but remain helpless, and get depressed. And one day, Anand's father dies of a heart attack. Anand refuses to go to Cambridge due to his father's death and financial condition.
He then sells papads in the city. One day, he meets Lallan Singh, an assistant of the local minister. Lallan takes Anand as a teacher in his coaching centre, Excellence Coaching Centre. There, Anand sees the plight of a boy who had to leave due to poverty. He thinks that these poor kids also have a right to study. Hence, he leaves Excellence and starts a separate tuition for poor kids, in which he enrolls 30 kids at a time. He teaches them to learn everything practically and have the concepts clear in an easy and fun way. This all enrages Lallan, whose centre is facing criticism for not retaining Anand. In course of the tuition, Anand gets immense help from his brother Pranav and mother. Lallan and the local minister plan to have Anand killed so that his kids won't be entering IIT. Anand is hurt brutally, and is hospitalised, on verge of death. Anand tells his students to then use their knowledge to defeat the goons sent by the minister, while he is being treated. The students, in unity, use their knowledge and defeat the goons and Anand is treated successfully. The students give the IIT exam and all 30 students pass successfully. ReadMore>