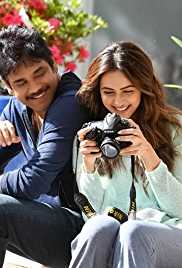 Samba Siva Rao / Sam (Nagarjuna Akkineni) is an aged bachelor and a perfumer by profession lives in Portugal. In his youth, a breakup with Suma (Keerthy Suresh) due to traditional harassment of his family makes him averse to the concept of marriage and pushes him to believe in flings. But, his family consisting of his mother (Lakshmi) and 3 sisters (Jhansi, Devadarshini, Nishanthi) give an ultimatum to enter wedlock within 3 months. In order to solve the problem, he enters into a contract and hires a young girl Avantika (Rakul Preet Singh) to act as his fiance for a few weeks and ditch him on the wedding day, so, his family will leave him alone. As Avantika, wants to adopt her deceased sister's son for which a bank balance is obligatory as per Portuguese rules, she also agrees. However, the situation changes when Sam's family gets emotionally closer to Avantika and even she too. According to the plan, Avantika absconds, as a result, Sam's mother collapses with a heart attack. To rescue her from danger Sam again hires Avantika with Plan-B that to act horribly towards the family so they do not like her anymore. In that process, Avantika shifts to Sam's residence when two start liking each other but Sam maintains silence because of the age gap. Grief-stricken Avantika successfully completes their contract and takes off. At last, Sam stands up to his family, confesses his schemes, expresses his love for Avantika, which she overhears and comes back. Finally, the movie ends on a happy note with the marriage of Sam and Avantika. ReadMore>