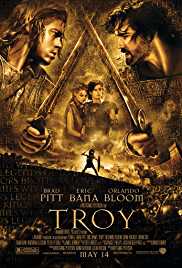 The film begins with Agamemnon, king of Mycenae, having subdued all the Greek kingdoms except Thessaly. The two sides have summoned armies to meet on the field of battle, but Agamemnon proposes single combat between two champions. The king of Thessaly summons Boagrius, while Agamemnon summons Achilles. Although Achilles is unwilling to fight for Agamemnon, Nestor persuades him to do so, saying he can save hundreds of men by fighting Boagrius. Achilles kills Boagrius and Agamemnon gains dominion over Thessaly.
Meanwhile, in Sparta, Agamemnon's brother Menelaus is entertaining Princes Hector and Paris, emissaries from Troy. Paris and Helen, Menelaus' wife secretly go upstairs, where it is revealed they have been having an affair. Helen expresses fear because Paris and Hector leave the next day, but Paris has a plan to rescue Helen. The two lovers run away, with Paris smuggling Helen on board a vessel bound for Troy. He later shows her to his brother, who thinks of sending her back, but realises that Paris will only follow her. The ship continues to Troy.
Menelaus, having discovered his wife's flight, has approached his brother for help. He convinces Agamemnon to attack Troy, Agamemnon agrees because he sees this as an opportunity to control shipping in the Aegean by destroying the most important city on the coast of Asia Minor. Agamemnon commands the Greek kings to assemble their forces but Nestor notes that Troy has never fallen before and convinces him that they need Achilles.
Odysseus, king of Ithaca, is sent to Phthia to convince Achilles to join Agamemnon. While there, he meets Patroclus, Achilles' cousin and student. Achilles also meets his mother Thetis, who warns him that if he remains he will live a long happy life but will not be remembered. If he goes to Troy, he will find everlasting glory and renown but will die. Wanting to be remembered, Achilles chooses to go to Troy, summoning his Myrmidons, including Patroclus.
Hector, Paris arrive in Troy, where they are greeted by their father, King Priam and their cousin Briseis. Priam is disappointed in Paris' actions but accepts Helen nonetheless. Helen warns Paris that Agamemnon and Menelaus will come for her, but Paris intends to challenge Menelaus to single combat. The combined Greek forces arrive the next day, with the Myrmidons taking the beach of Troy and desecrating the temple to Apollo. During this act of sacrilege, Achilles has Apollo's priests killed and takes Briseis, an acolyte in the temple, as his prisoner.
Agamemnon, hearing of Achilles' prize, takes her for himself, angering Achilles, who forces his troops to stay out of the war. The Greek and Trojan armies assemble outside Troy and Paris challenges Menelaus to single combat during a truce. Although having never been in battle, Paris is confident and uses the sword of Troy, a legendary sword used by Priam and his ancestors. Hector advises Paris to defend himself so that Menelaus will tire himself out, but Menelaus is able to remove Paris' shield and cut his thigh, leaving the Trojan prince to limp to his brother. Menelaus and Agamemnon fail to persuade Hector to leave Paris on the field of battle and Agamemnon claims the truce has been violated. Menelaus is killed by Hector after attempting to kill Paris, who is clinging to the feet of Hector. Agamemnon orders the Greeks to attack but they are pushed back by Trojan soldiers on the ground and archers atop the walls. During this time, Ajax the Greater is slain by Hector. Achilles watches Agamemnon retreat and does not intervene, to the dismay of Patroclus.
The Greek forces retreat to the ships and the Trojan forces are pulled back by Hector, seeig that they are within range of Greek archers. Nestor and Odysseus persuade Agamemnon to make amends with Achilles. Achilles taunts Briseis because of her loyalty to Apollo and Briseis question's Achilles' morals and questions why he wants to be a great warrior. She attempts to kill him during the night, but realises that she loves him and so refrains. ReadMore>